The euro continued to move lower and touched 1.1730 before it rebounded slightly after the U.S. job data. 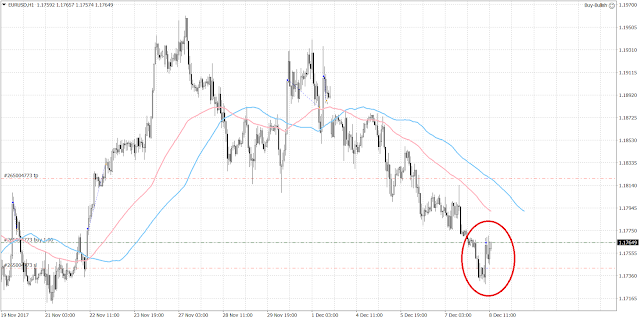 The EUR/USD was drifting lower toward 1.17 before the U.S. open.  It’s been nearly a 230-pip drop since December 1.  Even after the little rebound after the U.S. job data, the downtrend is still apparent and intact based on the hourly chart.

Somehow, the traders chose to ignore the better-than-expected new job increase by 228K, and rather the traders chose to focus on the disappointment from the weaker-than-expected 0.2% increase in hourly earnings.  The forecast was an increase of 0.3%.  Therefore, is it really the 0.1% in difference between the actual and the forecast that has sent the euro higher from the 2-week low, or is it merely the oversold condition that has triggered the traders to pocket the profits before the weekend?

It makes sense that the traders do not want to have any open position going into the weekend due to the geopolitical tensions.  Who knew if the U.S. would attack North Korea, or the chaos over Jerusalem get much worse?