The euro soared 100 pips or so from 1.1920 to 1.2020 on the news from China regarding its decision to scale back the purchases of the U.S. Treasuries. 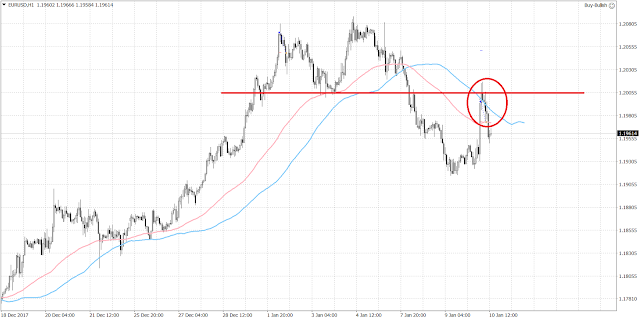 The EUR/USD was pressuring the 1.1920 level yesterday even though there was some good economic data from the euro zone and Germany.

The decline was put to a stop when China said it would slow down or halt the U.S. Treasury purchases.  The news sent the U.S. dollar down 70 pips against the euro immediately.    However, the euro was unable to hold on to the gain.  It’s given back 1/2 of the 100-pip gain already.

The news did not affect the Japanese yen’s strength against the U.S. dollar.  The BOJ surprised the market by ending of the bond buying earlier this week.  The U.S. dollar continued to fall further against the yen.  It is now inching closer to $111 from the recent high of $113.2.

A buy order was opened due to the knee-jerk upward reaction on the China-U.S. Treasury news from my MT4 EA.  It was a loss.  The stop loss was hit.