The ECB left the interest rates and QE unchanged; however, the ECB President Draghi’s comment drove the euro lower. 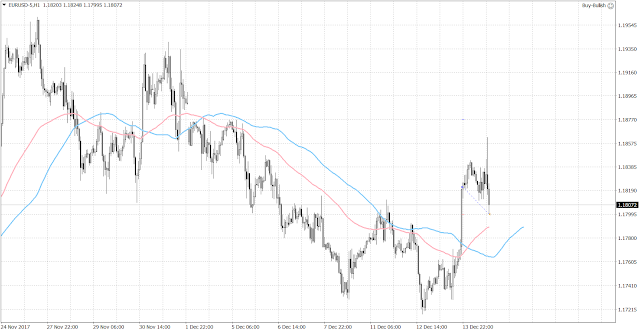 The U.S. central bank raised the rate by 0.25% yesterday afternoon as expected.  Not everyone on the board agreed on the rate hike.  2 members dissented.  Nothing new came out of the FOMC meeting.  Job market’s growth no longer seen “strengthening further,”  which sent the U.S. dollar lower against all of its major rivals after the Fed’s rate decision.

Today, the ECB and the BOE gave us no surprises, either.  Both the ECB and BOE left the interest rates unchanged as expected.

However, Draghi’s comment disappointed the traders, and then the selling of the euro began.   The euro initially caught some upward momentum after the ECB upgraded its economic growth forecast.  Unfortunately, the upward move was short lived.  The central bank revised its inflation outlooks, but the upward revision was less than expected by the traders.  Draghi also reiterated that a downside risk for inflation might come from foreign exchange movements, which sent the euro further lower.

A buy position was opened from my MT4 EA after the U.S. rate decision yesterday.  It closed with a loss.  The stop loss target was hit.