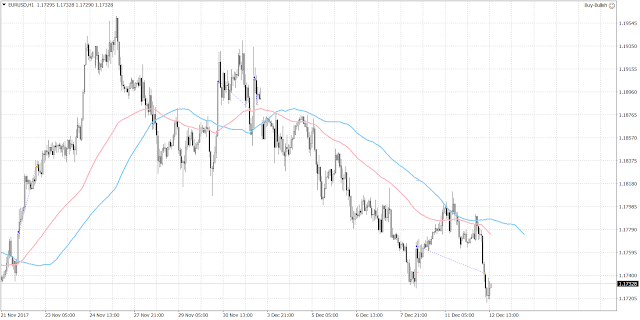 The EUR/USD has been driven to its lowest since November 21st amid the weak economic data from Europe and the strong numbers from the U.S.  The disappointing German ZEW survey showed that the business sentiment unexpectedly decreased in Germany and for the whole EU in December.  The U.S. November PPI, however, rose by more-than-expected as the gasoline prices jumped.

Tomorrow, the US will release its November inflation numbers and more importantly, the Federal Reserve will announce its latest monetary policy decision later in the afternoon.  The rate hike by 25 basis points has been pretty much priced in already.  Instead, the markets will be anxiously awaiting for the comment about the future interest rate stance.  A very hawkish Fed will certainly push the U.S. dollar higher.

The buy position opened from my MT4 EA last Friday after the U.S. job report closed with a loss today.  The stop loss target was hit.