The euro reversed its course from yesterday’s weak performance and slowly approached the 2017 high of 1.2092. 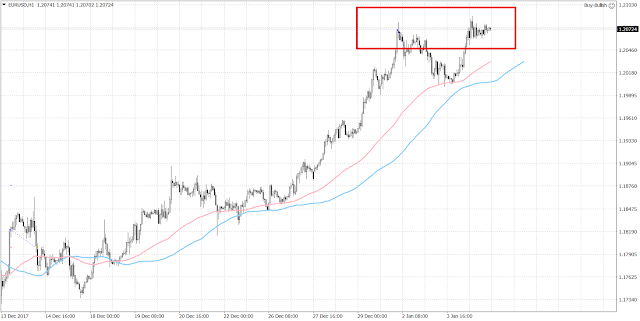 The euro is near the 2017 high right before the U.S. job data tomorrow.   Earlier today, some numbers from the U.S. economic data were mostly upbeat, but that didn’t stop the euro from rising.  All eyes are now on tomorrow’s job data.

The market is expecting 190K new jobs added in December, and the unemployment rate at 4.1%, and the average hourly earnings up 0.1 percentage.  As usual, salaries will carry an extra weight on the sentiment of the trading decision because the subdued inflation is a major concern for the Fed.  The whole purpose for the Fed to raise the interest rates is to fight the inflation.  If the inflation is not a threat, or if an deflation situation occurs, it will affect the Fed’s view on the monetary policy.