The euro continued to move HIGHER after Friday’s job data and touched 1.1811 before it ran out of steam. 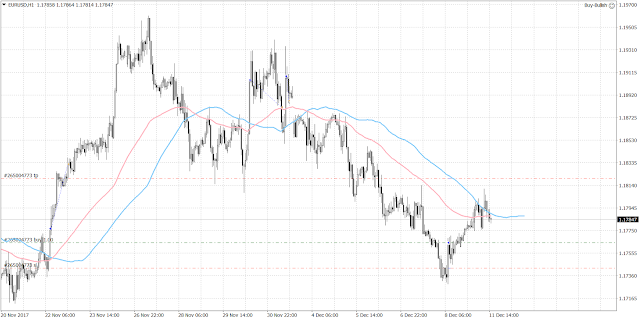 The EUR/USD moved higher after the U.S. job data on Friday.  The data was confusing though.  Somehow, the traders chose to ignore the better-than-expected new job increase by 228K.  They instead chose to focus on the weaker-than-expected 0.2% increase in hourly earnings.  The forecast was an increase of 0.3%.  Does the 0.1% in difference between the actual and the forecast really matter that much?  Or is it merely the oversold condition that has triggered the upward momentum?

The FX market remained quiet this Monday.  There are several big events later in the week.  We have the FOMC meeting on Wednesday, the US November inflation numbers on Wednesday, and the ECB monetary policy meeting on Thursday.

One buy position was opened from my MT4 EA last Friday after the U.S. job report.  Currently, it’s still open.